Everest 2017 has ended with overall success for Irish climbers. Four successful summits from the Nepal side (no north side Irish climbs this year) brings the total number of Irish summits of Everest to an impressive 57 since Dawson Stelfox first stood atop the worlds highest peak in 1993.

John Burke became the first Clare person to summit Everest after the Ascent Himalayas expedition team pulled off something of a coup by sneaking up for an ‘early’ summit on 16th May, as the strange weather pushed other summit efforts more to the right than usual this season. John is a successful hotelier and I guess he won’t mind me saying is also the husband of Irish actress and dancing star Aoibhín Garrihy. But something tells me that Aoibhín will now have to put up with people asking her if she’s married to yer man who climbed Everest. John joined me a few years ago for a training climb on Carrauntoohil during my Everest 2014 preparation, taking his nephew out for his first big climb. If you are in the Clare region of Spanish Point please stop by the Armada Hotel for a pint and to hear about how ‘The Man from Clare’ climbed to the top of the world. Kudos to John for raising €16,000 for ‘Elevate’ – bringing wellness programmes to young people in Clare.

Terry Kelleher from Dublin reached the summit on 22nd May with the Mountain Trip  (Mountain Madness) expedition team. I have seen reports that Terry was on the cusp of completing his Seven Summits challenge, so Everest may have been his 7th summit, but I am not yet able to confirm right now. Congratulations to Terry and to the US-based Mountain Trip team on their return to Everest after a long break. I was lucky enough to have completed an expedition with Mountain Trip on Denali in 2010. They enjoyed a successful return to Everest this year and it was great to see Terry add another Dublin summit to the Everest roll.

Rory McHugh a native of Dublin, was one of the last to summit Everest this season, reaching the top on 26th May with the Tim Mosedale team. Many in Ireland will be familiar with Rory’s voyage via his roving Everest reporter role for the Irish Times newspaper this season. Rory has vividly and entertainingly painted a no-nonsense picture of life on Everest – The ups and downs, the scares and excitements, the waiting, the jokers, the drama and frustration. If you have not read any of his dispatches, I strongly recommend finding them online. His scrutiny and observations on Everest life was impressive, and although he damn near missed his summit window after getting stranded in fog in Namche, he showed great skill and patience to complete the summit at the 11th hour. Well done Rory, on both the climb and for raising £25,000 for Child Rescue Nepal with four different school projects benefitting from this great cause.

Rob Smith from Omagh in County Tyrone, now lives in Fort William in Scotland and completed his first successful ascent of Everest via the South side having previously climbed Everest via North side in 2014. Congratulations to Rob.

Justin Condon from Dublin who is now living in New Jersey, didn’t quite make it to the top, but lives to fight another day. Justin attempted the mountain with American expedition team International Mountain Guides (IMG). After getting the dreaded Khumbu cough, he broke a rib from coughing during his second rotation up the mountain but pushed on, and while heading to Camp III on his final rotation broke another rib as the cough intensified. Despite completing his rotation and spending the night at Camp III, Justin had to end the mission and grab a helicopter to hospital in Kathmandu as soon as he got back to Base Camp. Those of us following Justin closely before and during this season will know the effort he has put into this and the physical pain he endured this season in trying to realise his goal (how he made that last push to Camp III is beyond me). Happily he is back home and recovering nicely and will live to fight another day. I met Justin, his wife Steph and his sister when they came to visit me at the National Altitude Training Center at UL when I was preparing for Everest 2014. We had a great chat about the mission ahead and we have both seen life take some strange turns since then. This season was not without success for Justin – he raised $25,400 for American Kidney Fund in memory of his late father.

Away from the Irish, great credit goes to my friend Ellen Gallant from Utah who reached the summit on her 3rd attempt. Ellen was part of that unfortunate class of 2014 and 2015 of which I can also claim to be an alumni, so it was heartening to see her try and succeed on her 3rd attempt. Kudos also to Une Prestholt from Norway who was on our 2015 expedition during the earthquake and tried again unsuccessfully in 2016. Une also found that third time was a charm in 2017. Not many folks will fully get what it takes to try something like this twice or even three times. Great credit to both ladies on having the mental and physical determination to place themselves back into the arena especially after what they experienced on previous efforts.

Away from Everest, Noel Hanna (aka the County Down machine with 8 Everest summits to his name) took a break from the mountain this year to focus on Kenchenjunga, the highest peak in India, the third highest mountain in the world, and until 1852 was assumed to be the highest in the world until George Everest and his buddies proved otherwise. It is regarded as one of the hardest mountains to climb, and the second most dangerous mountain on earth. Unfortunately conditions were against them and they had to head for home after 6 weeks. Great credit on an excellent attempt by Irelands most accomplished mountaineer.

In the neighbourhood of Everest Cian O’Brolchain who summitted Everest in 2012 with Jagged Globe, while raising funds for Cystic Fibrosis under the flag ‘Ireland to Everest’, was back in the Himalayas this year with Ascent Himalayas (with whom he now works) to take on Lhotse. After shaking off a nasty bug (which seemed to plague the Khumbu valley this season), Cian rallied and made it to the summit for what is claimed to be the first Irish ascent of Lhotse. The Himalayan Database does show that Domhnall O’Dochartaigh (Ireland) did summit Lhotse in Spring 2009 (See here). However my own previous research to try and pin a county on Domhnall for my Everest summits map (he summitted Everest in 2010) led me to the understanding that Domhnall is Canadian with Irish roots. I am not sufficiently skilled in geopolitical diplomacy to know how to place that conclusion within the Irish county map, but from what I could find/see, Cian may indeed be the first Irish native to have achieved the feat. If I am mistaken I am only too happy to update/correct the record. In any event, congratulations to Cian on a tough job well done.

Overall numbers on Everest in 2017 were likely same or more than 2016 (it will take a few months to shake out the exact totals, though we do know that more permits were issued this year than ever before). This season did have strange weather which delayed completion of fixed rope work until mid May, resulting in a summit window which took its sweet time to open up and which some folks lost patience with completely. In general though it turned out to be a normal year on Everest, the second in a row after the unique events of 2014 and 2015. As Nepal continues its recovery, it would certainly seem that we have returned to business as usual on the worlds highest peak. The number of clients attempting the climb reached record levels in 2017 and continues to trend upward. While it would seem sensible to adopt a quota system to help manage numbers to avoid the dangers of overcrowding in future, it is unlikely that local officials will grasp that nettle until something dramatic drives change. Until then, expect year-on-year increases in the total number of people attempting the worlds highest peak. It is perhaps a credit to the skill of expedition leaders that seasons of this size can run so successfully, although luck remains a large factor in outcomes. One wonders when crowds and El Nino will inevitably collide. 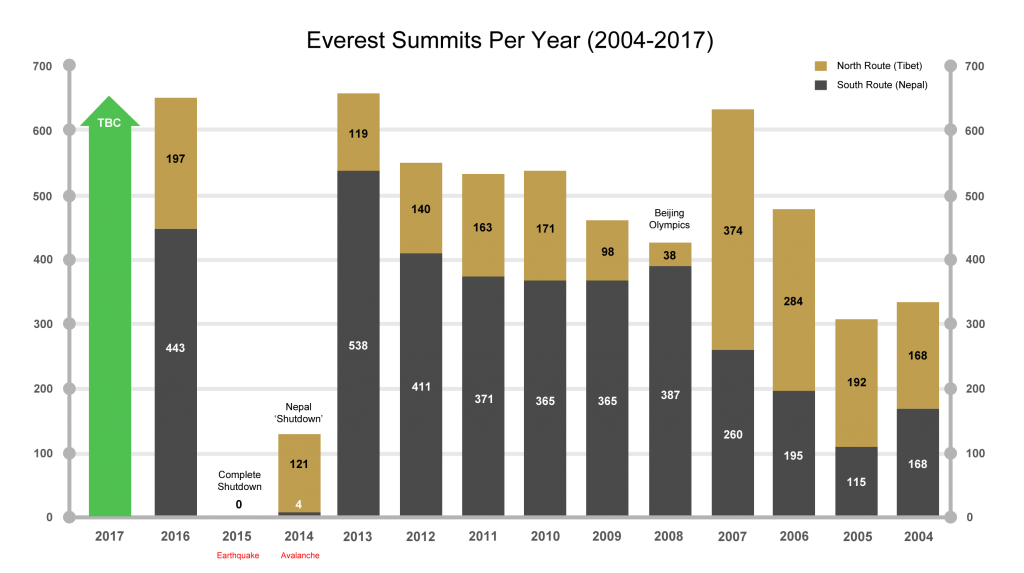 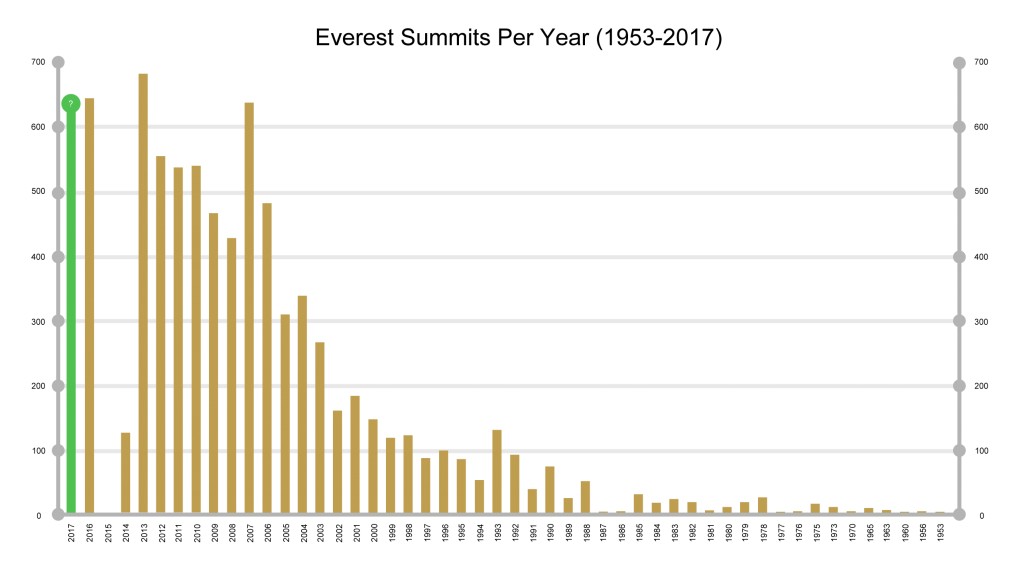 The 2017 Everest season will ultimately be remembered for the loss of the great Ueli Steck, a uniquely talented alpinist whose fall on the Lhotse Face ended the career of one of mountaineerings greatest figures. Closer to home, it will be remembered in Ireland for the happier successes of John, Terry and Rory who will now be adjusting to life after Everest. The fundraising of all four Irish members of the Everest class of 2017 will leave a lasting impact from Kathmandu to Kinvara. All four now face their next big challenge in pushing past Everest and getting back into the swing of real life. Folks should not underestimate how difficult the transition back to normality will likely be after such a long and difficult experience, and indeed after such a long fixation with such an invasive force as Everest.

So take it nice and slowly lads, have a few pints and welcome back.