The Everest 2016 season has reached its conclusion with expeditions heading home on both Nepal and Tibet sides. It was a very successful season for Irish climbers, with four summits creating new and exciting records, and bringing the total number of successful summits by Irish climbers to 53. 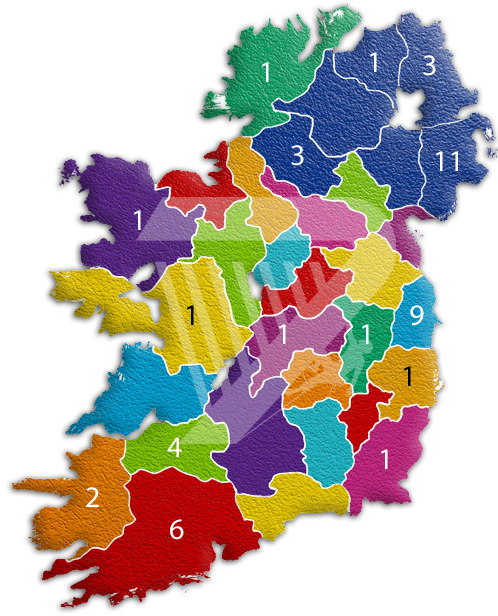 Mary Scannell became the first Irish person to reach the summit of Everest this season. Mary from Co. Kerry reached the top via the South Route (Nepal side) on 13th May with the Jagged Globe team, in rather tough conditions. She now joins a distinguished list alongside five other Irish women who have successfully completed this incredible feat. To top it off, Mary has now completed all of the Seven Summits so its congratulations on the double. Annascaul has a proud tradition of adventure going back to the great Tom Crean, and so it is fitting that on the 100th anniversary of Creans valiant efforts to save the crew of the Endurance, that another Annascaul giant should emerge. Bravo Mary.

Noel and Lynne Hanna (from Co. Down, now living in Johannesburg) reached the summit on 21st May via the North Route (Tibet side). This is the second time they have reached the top together as a married couple, having previously succeeded via the South Route (Nepal side) in 2009. They are most likely the worlds first married couple to have reached the summit of Everest together from both sides. Well done Noel & Lynne. This also marks Noel’s 8th summit of Everest (yes you read that correctly!!!). What a machine, and a genuine nice guy to boot. This is not the last we will hear from Noel for this year – In a few weeks he heads to the Karakoram range to focus on a little peak known simply as K2.

Rob Mortell from Limerick has become the youngest Irish person to summit Everest. The 26 year old reached the summit on 23rd May via the North Route (Tibet side) and I’m looking forward to hearing all about it over a pint soon. I met Rob at a talk in the Great Outdoors in Dublin back in early 2013 when I was preparing for Antarctica. The notion of taking on some big peaks was starting to take shape in his head at that stage. Rob went on to climb the Matterhorn later that year and I may have helped twist his arm into doing Denali in 2014 as a pre-cursor to bigger things (apologies to Liz and his family for that, my bad!). Rob now has the Irish record for youngest summit, previously held by fellow Limerick man Mark Quinn who reached the top in 2011 aged 27. Well done Rob, see you soon for that pint.

Congratulations to all who have enjoyed a successful season on Everest this year, including my good friend and Antarctica tent-mate Paul Pottinger (Seattle, USA) whose blog was without doubt the best on the mountain, offering us all a glimpse into the ups and downs of life on a 2-month expedition. Also congrats to Melanie Barnett Southward (UK) who reached the top this year (in the dark) on her third attempt after experiencing the disasters of 2014 and 2015. I met Melanie last year on Everest when success looked very far away indeed. She fought back and made it this year, which is a great testament to her and her determination. Its also great to see mission successes for Greg Vernovage (IMG) after two difficult years and Garret Madison (Madison Mountaineering) who had a very tragic and sad time last year too. Finally, a note on Mingma and Pasang Sherpa who Irish mountaineering enthusiasts will know from their talks last year and both of whom were part of my recent Everest experiences – Pasang Tenzing Sherpa became one of the first to summit this year as part of the Sherpa team who fixed the ropes to the summit on the Nepal side. His brother Mingma Tsiri Sherpa (19 summits) didn’t go for the summit this time after getting some bad vibes about this years attempt. It’s good to see everyone back safe and sound and good to see the Sherpa community enjoying a better season with all of the benefits that this will now bring to them and to Nepal in general.

Overall numbers on Everest were down on previous years by anything between 15-20% depending on who you believe. On the Nepal side it was reported by the Nepal Tourism Ministry that 287 permits had been issued to 32 teams. If you add the Sherpa and Tibet climbers to that total, the overall population on the mountain was still significant, so it was in many respects business as usual this year. Latest projections via Alan Arnette indicated in the region of 560+ summits in the 2016 Everest season. That is the third highest level of summits in one season in the history of Everest, indicating that Everest is back in business! It was also statistically one of the safest years on Everest in recent history. The graph below shows summit total for 2016 in comparison to other years in the recent past. 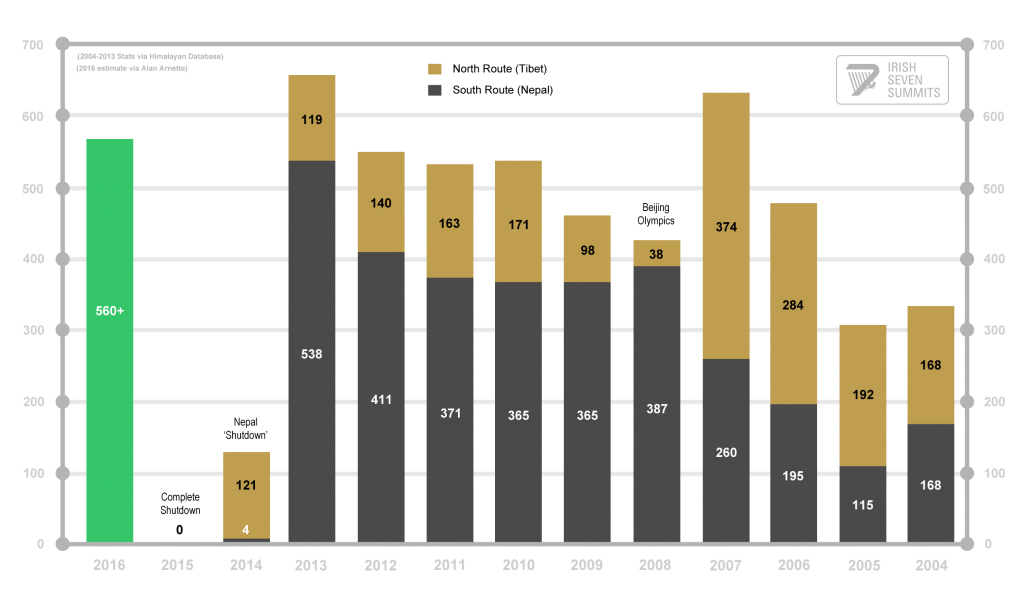 With many of the 2015 ‘unused’ permits still valid next year, it is almost guaranteed that 2017 will see a restoration of numbers to 2013 levels or beyond, and could end up being the busiest year in Everest history. That is not good news for anyone in the know about the effects of crowding on Everest. Also, looking at the graph, I would hate to have been the eejit who decided to climb Everest in 2014 and 2015…. oh wait, damnation!!! :-).

The Everest ER medical team who do an amazing job and who were complete super heroes last year during the Base Camp disaster, reported last week that they had seen 300 patients over 7 weeks of the 2016 season on the Nepal side, and they provided a very interesting breakdown of their stats…

– 65% of patients were Nepali, next 3 most frequent nationalities represented in patient visits include USA, India & UK.
– The vast majority of visits were related to cough (27%) with gastrointestinal complaints coming in a close second.
– Other commonly seen conditions included altitude illnesses, with a few serious cases of HAPE and HACE.
– Increased incidence of frostbite compared to past years (5% versus our usual 2-3%.)
– Dental problems came in at 3% of visits.
– One case of high altitude retinal hemorrhage causing visual field deficit.
– In total, 15% of patients required evacuation after stabilization.

Sadly there was 7 recorded deaths this season… Eric Arnold (Netherlands), Marisa Strydom (Australia), Ang Furba Sherpa (Nepal), Paresh Chandra Nath (India), Goutam Ghosh (India), Subash Pal (India) and an unnamed climber on Tibet side. Dutch native Eric Arnold, an accomplished athlete, had attempted Everest three times previously, and in 2012 came within 250m of the summit. His attempts on Everest in 2014 and 2015 were halted by the disasters which occurred in both years. Dr. Marisa Strydom was attempting the Seven Summits challenge with her husband Robert Gropel, and had previously climbed Denali & Aconcagua among other peaks. Ang Furba Sherpa (climbing Sherpa) was fixing ropes on the Lhotse Face for an Indian Army team when he slipped and fell to Camp 2. The 25 year old Sherpa had previously climbed Manuslu 8156m and a number of other 6000-7000m peaks. Indian climbers Paresh Nath, Goutam Ghosh and Subash Pal all died close to the summit of Everest, circumstances unknown. The only recorded death on the Tibet side occurred at basecamp where a 65 year old unnamed climber was reported to have suffered a heart attack and died. No further information is known at this time. Condolences to the families of all who lost their lives this year.

If you head over to Alan Arnette’s website you will see some great articles and insights from the season just gone. I would also recommend Paul Pottinger’s blog if you want to immerse yourself lightly and poetically in the whole experience.

When its all said and done, the season belongs to Mary, Noel, Lynne and Rob – Congratulations.

The list above is county-centric for no other reason except that is how I tracked it. So I should also include with great admiration those climbers with strong Irish connections who also completed Everest including… Anselm Murphy in 2008 (London-Irish), Chris Jones in 2009 (UK, living in Clare), Domhnall O’Dochertaigh in 2010 (Canadian-Irish), James Haydock in 2010 (UK, living in Dublin), Patrick McKibben in 2013 (Canadian with Irish roots) & Sean Mooney in 2013 (Canadian with Irish roots).