On the morning of Good Friday 2014, I was ascending fixed ropes near the top of Leboche East at 6119m as part of final pre-acclimitisation before starting the one-month rotations up the high mountain and through the various camps that lead to the top of Everest. We reached the summit at 9am after six hours of tough work, and sat mesmerized by the wide expanse of Everest Base Camp below us, and the Khumbu icefall just across the way. 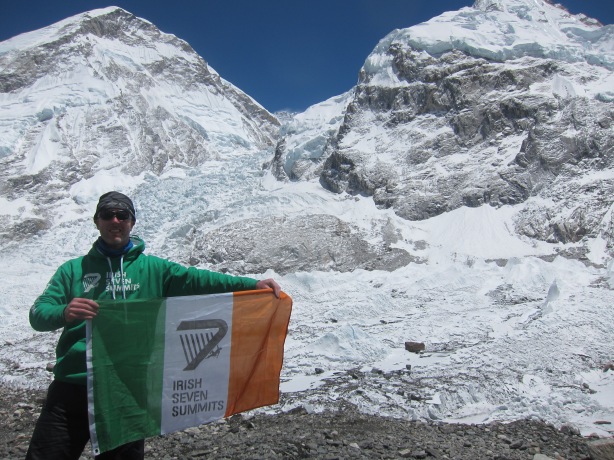 As i sat there with my buddy Niall O’Byrnes staring across at the icefall, we were completely oblivious to the fact that just 2 hours previously a serac had crashed down the icefall killing 16 Sherpa and injuring half a dozen more in what became the deadliest day in the history of Mt. Everest. The Khumbu icefall is a frozen waterfall sitting atop a fast moving glacier in the area between Everest Base Camp and Camp 1. It is always changing and there is nowhere to run if trouble strikes. Next day we reached our tents at the foot of the icefall at Everest Base Camp, and into a scene of confusion and grief, our expedition hanging in the balance as a week of mourning began.

Climbing Everest was to be the final part of my Seven Summits project – to climb the highest peaks on all seven continents, which less than 300 people worldwide have ever done. Some goals are life-long, but this one was born at Rolls-Royce in Hong Kong back in 2005. I first developed a taste for hiking during the Rolls-Royce Apprentice Associations ‘3-Peaks Challenge’ back in 2003, and it was in Hong Kong during my 1-year assignment to Cathay Pacific in 2005 where I was encouraged to think big and trek to Everest Base Camp. In fact it was on that trek that I studied the early pioneers of mountaineering and first read about the Seven Summits challenge before reaching the peak of Kallar Patthar overlooking Base Camp on my 28th birthday in October 2005. The Seven Summits goal was born and a cunning plan to attack one of the seven with some college buddies was concocted at a friends wedding.

Kilimanjaro was first on the list. In April 2007, and amidst preparation for Trent 900/A380 Entry into Service I flew to Tanzania after months of training in the Derbyshire countryside and the Lake District and Cumbria in preparation for the journey to 5895m and the top of the tallest freestanding mountain on Earth. The trek took seven days and in the surrounds of the retreating snows on the summit of Kilimanjaro, Africa was successfully conquered alongside Niall O’Byrnes, Martin Maher, Alan Whooley and Eli Tanner. 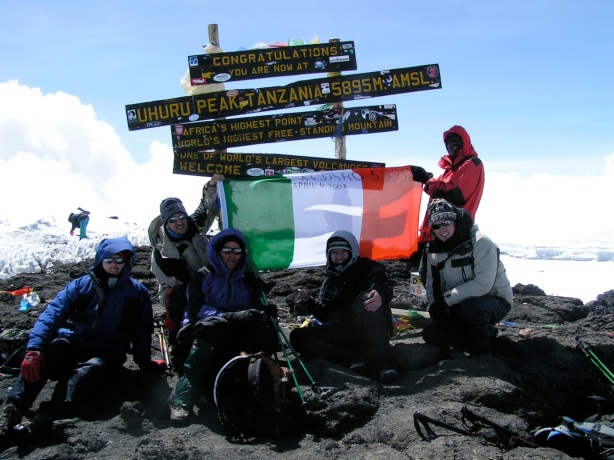 Next up was Elbrus on the Russia/Georgia border – the highest mountain in continental Europe. We arrived in the deep dark corner of south west Russia and into a week of acclimitisation and climbing in conditions plunging to -30 degrees Celsius before slowly edging towards the summit and claimed our second continent. This was a cold experience and we had some big lessons learned in managing gear in the extreme conditions. The team of 5 was now 2 – exhaustion took its toll on the icy slopes of Europes highest peak. Niall O’Byrnes and I both stood atop Europe, the Kildare man showing impressive steel and offering the mother of all pep-talks when i was fading on the summit push. 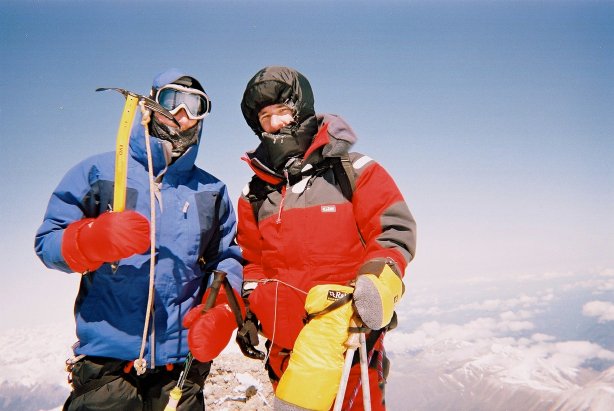 In June 2008 I moved to Hartford Connecticut as Customer Fleet Director at International Aero Engines. Training shifted from the English countryside to New Hampshire and the presidential range, which boast the fastest wind speed in the world on the summit of Mt. Washington. Other weekends were spent on Monadnack in Vermont or in the hills of upstate New York.

That December I headed to Aconcagua in the Andes, at 6962m the tallest mountain outside of Asia. But fate had other plans, and halfway through the expedition I would learn that my father had suffered a heart attack aged 64 and was dead. After helicopter evacuation and frantic re-routing of flights I managed to make it home for the funeral. Niall followed down the mountain on horseback and would be there to shoulder the grief and shock. Thoughts now a million miles away from mountains and Seven Summits.

We climbed Mont Blanc in 2009 to sharpen skills and get back on the horse and in early 2010 journeyed to Melbourne to climb the modest Mt. Kosciuszko, Australia’s highest peak. Another continent done and ahead sat the mighty and daunting Mt. McKinley in Alaska.

McKinley is one of the toughest mountains in the world involving 21 days of dragging sleds, building camps and facing into some of the wildest weather on the planet in the depths of Alaska along the rim of the Arctic Circle. Our Chief Financial Officer had found a lump on her breast a few months before and so we decided to raise funds for the Susan G Koman organization, working to help cure Breast Cancer. The strength and positivity demonstrated by our CFO filled me with confidence that if she could face down her fears, I could face down mine. The board at the ranger station in Talkeetna read “52% summit success” on our arrival but we all reached the top on a glorious day in late June with US Air Force fighter jets crisscrossing the skies above us as we climbed the summit ridge with drops of thousands of feet on either side. It was exhilarating and North America was now off the list. 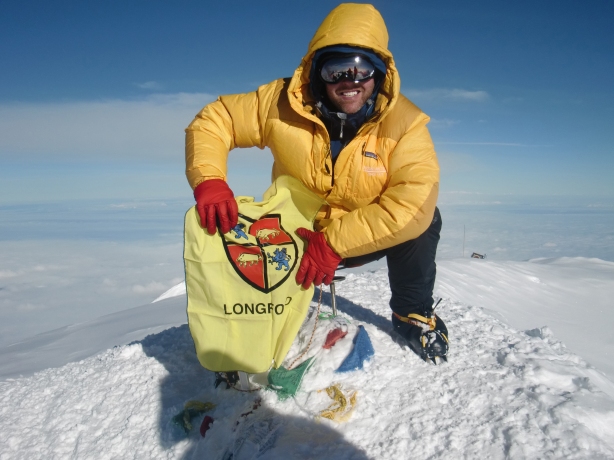 I moved to Berlin in 2011 as Business Manager for the Boeing Fleet at Rolls-Royce Deutschland and found myself living in one of the flattest places on Earth. Its highest point is the Teufelsberg or Devils Mountain, an 80-foot artificial hill created from the rubble of the city in the wake of WW2. On breaks from the hectic pattern of work I could be found with 25kg backpack, trekking up and down the Devils Mountain for hours on end, strengthening muscles and preparing for the return to Aconcagua.

By year-end I found myself back in Argentina, and an emotional return to Aconcagua. After a grueling couple of weeks, seventeen of us marched towards the base of the infamous Canaleta some two hours from the summit. After a break for food and rest, only seven people rose to climb on, and two hours later I knelt down and placed a stone from my father’s grave beside the cross at the summit and took a pebble from the top to bring back home. Checkmate! 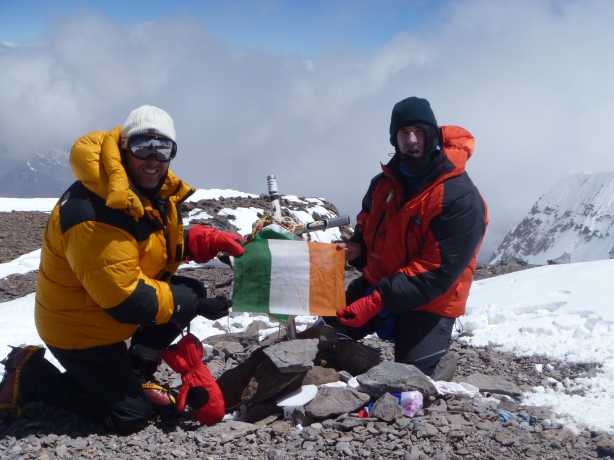 By the end of 2012, and with two massive expeditions ahead, I made the difficult decision to take a break from Rolls-Royce after 11 fantastic years to focus on full time preparation for the final peaks – Antarctica and Everest. I re-located to Ireland and to my alma mater (University of Limerick) where I spent much 2013 living in simulated altitude at the National Altitude Training Centre, a unique hypoxic residential facility where I could train my body to adapt for the challenges ahead. I was now in full time training and being monitored by the Sports Science department on areas such as body composition, nutrition, VO2max and bloods. I punctuated training with ice climbing training in Austria and a two-week workout in the Alps including a solo summit of Mont Blanc to further sharpen the mountain skills. 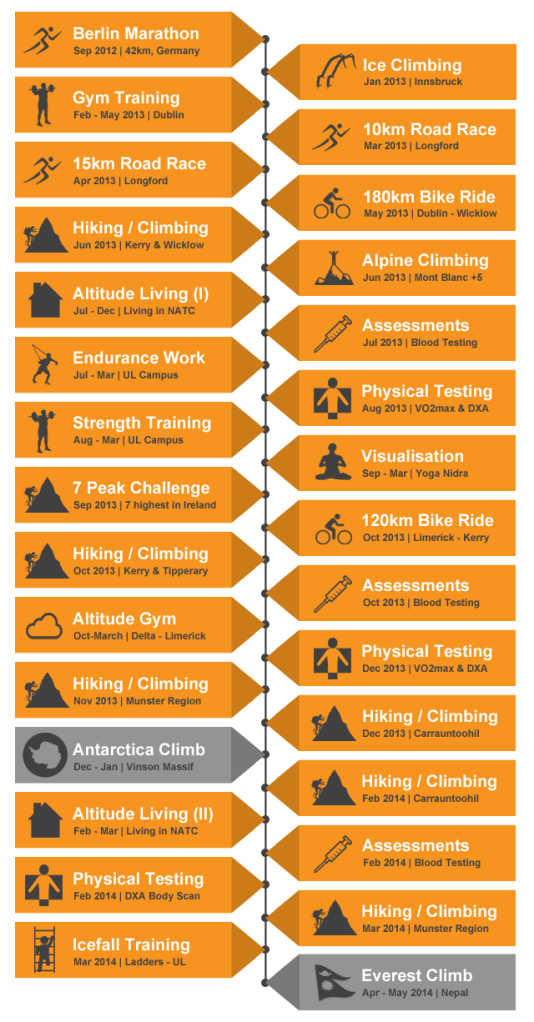 In December 2013 I made the long journey to Antarctica to climb Vinson Massif, the highest peak on the ice continent. Airlines don’t fly to Antarctica, so we chartered a Russian IL-76 military transport plane to take us to the Union Glacier research station some 700km from the South Pole, from where we could get access to the base of the mountain and start climbing. On 5th January 2014 I found myself standing on the summit of Vinson Massif looking out over the incredible vastness of ice and snow. What a privilege to be on the ice continent exactly 100 years on from Ernest Shackelton & Tom Crean and that unique gang of British and Irish explorers. Another one down, 1 more to go. 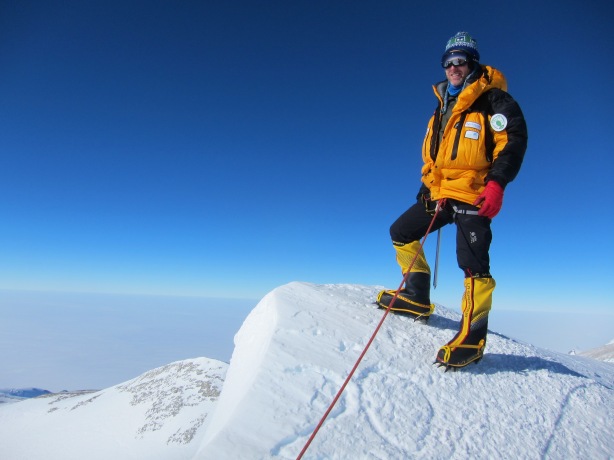 Everest was the culmination of almost two years of specific preparation, training, promotion, media & fundraising and seven years of subconscious brick building to get my mind and body to the level of preparation required. The goal was a tiny window of time in April & May in which I hoped to be lucky enough to attempt a summit push in the middle of a 60 day expedition. At the end of March 2014 we flew to Kathmandu with €10,000 each worth of equipment and supplies to begin the 60-day voyage to the top of the world. We were 18 days into the expedition on that fateful morning on top of Leboche East when across the way on the Khumbu Icefall everything had changed utterly. Within 7 days our expedition was over as teams packed up and left following an effective shutdown of the Nepal side in the wake of the avalanche. We finally left base camp on 25th April. No Everest this year!

The events of Everest 2014 were both devastating and surreal. We had a front-row seat for the series of meetings and dramas that led to the first effective shutdown of the mountain in recent history as peoples hopes and dreams unraveled before their eyes. In the neighbouring valleys, families were coming to terms with the impact of their loss, breadwinners, village leaders, parents, husbands wiped out. A few days later one of our expedition crew was killed in a fall while descending from Everest Base Camp. A few days after our return to Ireland the little lad we had been raising charity funds for (Liam Heffernan) died aged 5 from Battens Disease. Before we left for Everest in April we made a promise to his Dad to bring his toy dinosaur to the top of the world, and we intend keeping that promise and doing our bit to help build Liams Lodge and turn their dream into a much needed reality.

So I have discovered over the course of my Seven Summits journey that there are many ways to die, but there remains one certainty about living and it is that goals, hopes and dreams can only be achieved if you embrace circumstance and grasp opportunity. We have had the great joy of raising €35,000 for worthwhile charity organisations and are proud of our ongoing support for the UK Himalayan Trust Sherpa Avalanche Appeal through sales of our branded clothing range. My family, friends and employers on multiple continents and over multiple years played a big role in this journey and when I return to Everest for the final chapter next May I will climb with fond memories and very great appreciation.