The new height was announced on December 8th 2020 in a joint statement by the Survey Department of Nepal and Chinese authorities, and is the culmination of many years of work to definitively measure the height of the highest peak on earth, initiated by Nepal. The Nepalese surveyors reached the summit last Spring, while their Chinese counterparts reached the top this year, and the final result was an average value between the measurements by Nepal and China, in accordance with scientific rules. This new height is 2.8ft higher than the last official measurement recognised by Nepal, 13ft higher than the last recorded height recognised by China and 3 feet lower than the last US measurement taken in 1999.

This is the latest in a series of height measurements taken over the years. The first evidence of the scale of the peak came in 1856 when a mathematician working for the East India Company’s Great Trigonometrical Survey – a British colonial project to survey and map the Indian subcontinent, found that Peak XV was in fact the highest mountain in the world. Several years later this was confirmed by Colonel Waugh, the British colonial survey-general of India, and, despite the mountain already being called Chomolungma by the Tibetans and Sagarmatha by the Nepalese, he decided to name it after his predecessor Colonel George Everest (who was apparently very embarrassed by the honour). 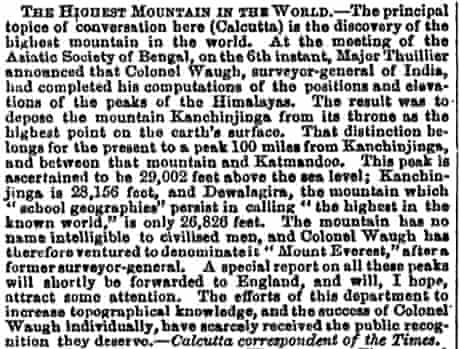 A Survey of India between 1952 and 1954 later established a height of 8,848 metres which became widely accepted.

A Chinese survey in 1975 measured the peak at 8,848.11 metres, and an Italian survey, using satellite surveying techniques, measured it at 8,872 metres in 1987, but questions arose about the methods used. In 1992 another Italian survey measured the summit at 8,846 metres by subtracting from the measured height of 2 metres of ice and snow on the summit, but the methodology used was again called into question.

An American survey in 1999, sponsored by the U.S. National Geographic Society, took measurements using GPS equipment. Their finding of 8,850 metres, plus or minus 2 metres, was accepted by the society and by various specialists in the field (and is the reason many American climbers quote 29,035ft as the height). However this measurement was not officially recognised by Nepal.

The Chinese again mounted an expedition in 2005 using ice-penetrating radar in conjunction with GPS equipment. The result of this was what the Chinese called a “rock height” of 8,844.43 metres, which, though widely reported in the media, was recognized only by China for the next several years. Nepal disputed the Chinese figure, preferring what was termed the “snow height” instead.

There is however no dispute between Nepal and China on today’s announcement as officials at Nepal’s foreign ministry and department of survey said today that surveyors from both countries had co-ordinated to agree on the new height of 8848.86 metres / 29,031.69 feet.

The new height measurement comes five years after a major earthquake in 2015 which may have had an impact on Mt. Everest’s height. The 7.8 magnitude earthquake killed nearly 9,000 people in Nepal, and caused an avalanche which buried parts of the base camp on Everest, killing 19 people.

According to the BBC, the new height was surveyed as follows: “Nepal used the Bay of Bengal as its sea level datum, but India had already surveyed a point closer to Everest, near the India-Nepal border, from the bay, and was able to provide the Nepalese surveyors with the height at that point. From there, Nepal built a network of line-of-sight stations stretching nearly 250km (155 miles) to the point Everest first become visible, creating a chain of points it could measure and add together. The Chinese surveyors, according to the state-run China Daily, used the Yellow Sea in the eastern province of Shandong as their sea-level base. Surveyors from both sides also used trigonometry formulas to calculate the height of the summit. The formulas they used calculate the height of a triangle by multiplying its base with its angles. But for all the clever ground work, someone still needs to be on top of the mountain. The Nepalese surveyors went up to the summit last year, while the Chinese surveyors went up in May, becoming the only team to reach the top in 2020, after Nepal suspended all expeditions during the coronavirus pandemic and China banned foreign travelers. Nepalese officials said they used 12 different lower peaks looking up at the Everest summit for their trigonometry calculations, to achieve a more precise result. Chinese media reported that Chinese surveyors used the same method. Once the surveyor’s beacon had been placed on the summit, surveyors at stations around the summit measured the distance from the six points to the beacon, which meant at least six triangles could be calculated to determine the mountain’s height. Both sides also used Global Navigation Satellite Systems to receive elevation data from numerous receivers in their calculations.“

Scientists estimate that Mt. Everest is 50 to 60 million years old, which is only a teenager by geological standards. The mountain range was formed by an upward force generated when the Indian and Eurasian tectonic plates collided, pushing up the rocks that formed the highest mountain on Earth. That force is still at work today, pushing Everest’s summit slightly higher each year. And as of this moment, that summit sits at 8848.86 metres / 29,031.69 feet, along the border between Nepal & Tibet.

According to the Himalayan Database, there have been 10,271 summits of Everest by 5,790 different people since the first successful ascent by Tenzing and Hillary in 1953, while 172 people have unfortunately lost their lives on the mountain over the years. Doug Scott, the first Briton to summit Everest, died yesterday (RIP). In Irish terms, Everest has been climbed 67 times by 53 climbers from the island of Ireland. There have been 129 attempts to climb Everest by 90 different climbers from the island of Ireland since the first attempt in 1993, and alas 4 Irish deaths. Find more details here.