Next weekend I return to Nepal to complete my Everest mission following the disappointment of last years cancellation due to the tragic avalanche which claimed the lives of 16 Sherpa and led to the effective shut-down of a season which witnessed 19 deaths, including one of our expedition staff members. This will be a difficult and emotional period for those families and for the Sherpa community in general and our thoughts are with them all.

The 2015 Irish Seven Summits team will be different to last year. Niall withdrew from the expedition in January and Madhura pulled out last September – both due to work commitments clashing with the Everest 2015 project. So I will be going solo and will certainly miss both Niall and Madhura during the next two months.

I will be climbing with Mingma Tsiri Sherpa (19 Everest summits) and his Ascent Himalayas Trek & Expedition company which is one of the few Sherpa owned and operated outfits on the mountain. It is good to know that there will be familiar faces from last year (Norwegians Teo & Ingvill) in our expedition team this year and I am also glad to hear that Ellis Stewart and Alex Staniforth from UK will be back this year with Tim Mosedale – I look forward to dropping in on their camp for a catch-up. I’m also excited that my old Antarctica teammates Paul Pottinger and Ellen Gallant will be on Everest this year with IMG and Himex respectively, so I look forward to some great craic with those guys at Base Camp.

Our itinerary for Everest 2015 has undergone some significant changes from last year, in an attempt to embed some of the lessons from last years avalanche. Our Acclimatization phase will include climbing two pretty big peaks – Pokalde (5180m) and Island Peak (6173m) and spending two nights at 6000m just below the summit of Island Peak to better adapt and prepare for the upper mountain on Everest. This program of altitude adaptation should enable our team to finally arrive into Everest Base Camp on Day 20 with the necessary adaptation in place for both Base Camp and Camp 1.

After our Puja ceremony and some rest and recovery at Everest Base Camp, we will then focus on the upper mountain adaptation phase. This will involve climbing to and sleeping at Camps 1, 2 & 3 on Everest and reaching altitudes up to 7500m to further enable our bodies to slowly adapt to the thin air and reduced atmospheric pressure. We will then return to Base Camp and wait for the weather window to appear. Statistically the window appears between 15th and 25th of May, so this is a waiting game.

Once the weather information is understood and a weather window established, we will arrange to push towards the summit via two nights at Camp 2, one night at Camp 3, rest at Camp 4 and a final 14-16 hour summit attempt. We will be on supplementary oxygen from Camp 3 onwards due to the significantly low level of oxygen absorption. 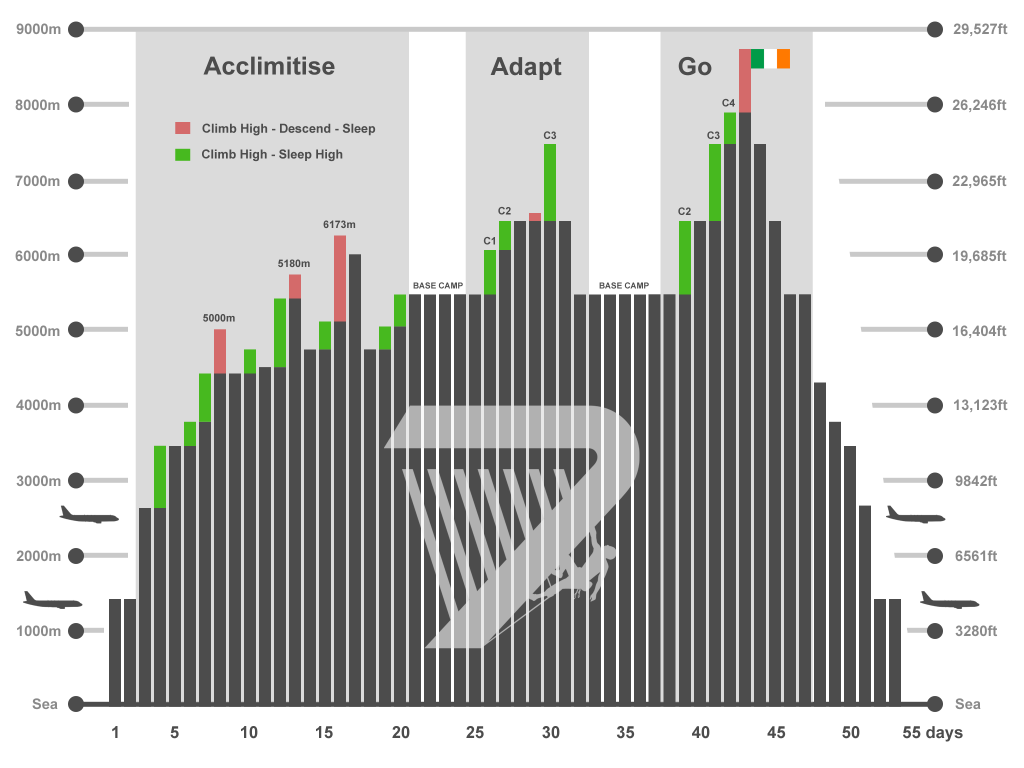 The changes to our itinerary reflect our appetite to complete some of our altitude adaptation away from Everest and reduce our exposure on the icefall (where the avalanche occurred last year) by reducing by 50% the number of crossings of the icefall this time around. This does not mean we are immune to the risks on the icefall, but if we have learned anything from 2014 it is that reduced icefall crossings for climbers and Sherpa should be a priority. We have also reduced the number of nights spent at Camp 1 to just a single one this time around due in part to the avalanche risk at this camp. Time will tell whether our changes prove successful, but the onus is on us all to embed lessons from the 2014 disaster, and this is our teams attempt to do so.

This coming season is perhaps more significant than most for climbers, Sherpa and residents of the Khumbu. While mainstream media obsesses over re-hashed stories about poo and armchair critics engage in annual judgmentalism (a curious pastime that I will never understand), 500 dedicated individuals from across the world will descend on Kathmandu having completed months/years of hard work and sacrifice to earn the chance to invest their own hard earned money in attempting one of the worlds greatest challenges. My journey back to Everest has been the toughest experience yet, but that is for another day. For now we will all be hoping that the ties that bring us back to Everest will inspire the cooperation necessary between climber and sherpa to make this season a great success for everyone and stem the tide of negative media surrounding this great mountain.

PS – Rather than reposting the endless litany of media reports from icefall route changes to poo problems to Nepalese government permit debacles, I have instead created 35 different Everest Facts which I am posting daily on social media in the run up to the expedition. This will allow teachers across Ireland who kindly follow our progress to bring these facts into the classroom and help raise awareness around the fascinating history of Everest.